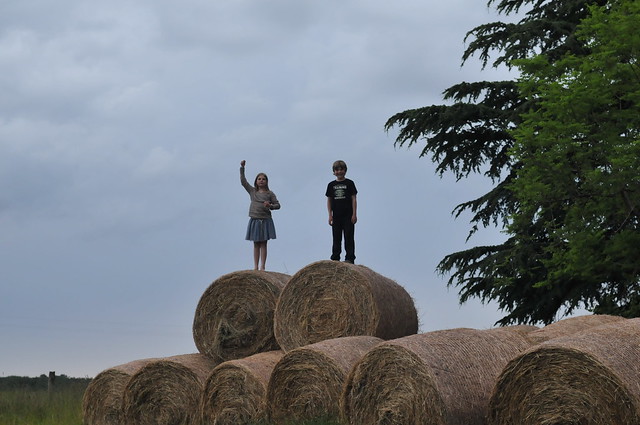 The Adventure Playground now has Adventure Hay Bales™.  Underneath one of the bales is Minty’s other gumboot.  Not sure how that played out, but Brent placed a bale on her right gumboot ( Minty’s foot was not in it at the time ).

Minty: Why is that discord hanging on the wall? 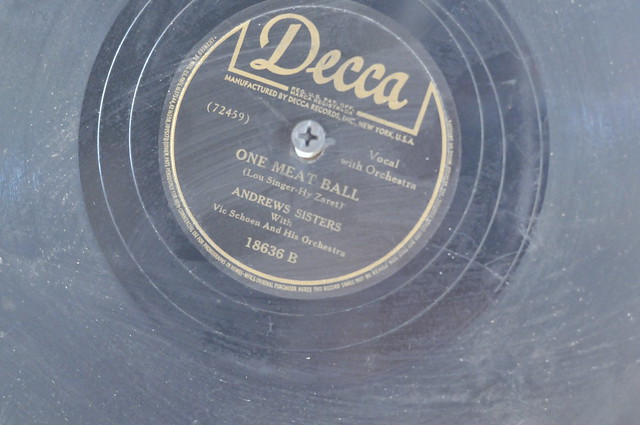 I carried a small collection of 78 records around with me while I was a student and starving-though-always-had-money-for-a-pint artist.  I can think of ten other things that would be lighter and easier to manage than a small collection of 78 records.  I had a player as well, but that was a Goodwill kiddie player that did 45, 33 1/3 and 78.  With our move to France, I gave the collection to one of my sisters and kept the one record that I love, ” One Meat Ball. ”  The other side has ” Rum and Coca Cola.”  Great tune, but for me, doesn’t have that nostalgic impact of One Meat Ball.

This giant, black CD came up a few days ago with Otto asking about it when he viewed a hot Euro dance hit music video that delivered discords in pizza boxes to happy recipients.  I explained the record thing and he was totally amazed at the technology.  A needle?! And it PLAYS MUSIC!?  But HOW!?  CDs are so boring and un-amazing to these kids of today.

Thankfully there are people who post video of records playing on Youtube so you can experience life before ones and zeroes.

… I suppose soon enough, we will have Youtube videos of CDs playing.  After that, we’ll need a way to watch bits fly off a USB.  All to remember the good ol’ days.

One thought on “Adventure Playground and The Discord”