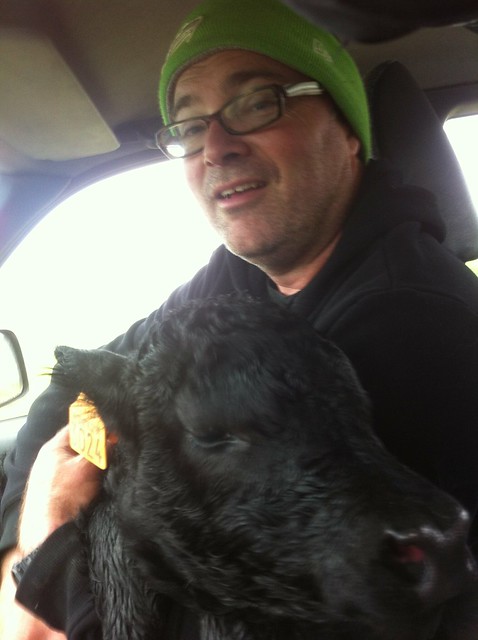 Two new calves this day. Brent moved the herd and then went to tag the calf left behind. As he does safely, while the mum was off munching. This gal was not so impressed with getting her ears pierced. ” The calf is running the wrong way,” I hear from Brent on the radio. She crossed to the next paddock and Brent asked for some back-up. I drove down in the truck. She wasn’t running too fast, but steady. She was too far ahead of him, so when I met her with the truck she stopped. Honked my horn to get her to turn around towards the herd. No such luck.

She kept running, running, running. Up the hill to the next paddock. Towards the courtyard she went, I jogging beside her as to not lose her. I used to jog in Discovery Park in Seattle Washington. I worked on my breathing back then which helped for this moment now. So we jogged next to each other. I tried not to panic. Catching a calf in this mode is not easy. They have rodeo events for this situation. Calves are random with their direction. They are fast. They are strong. I without a horse and a lasso, all I could do was jog.

Her tail flicked up, I reached for it, grabbed it then tackled her like a rugby player. I radioed to Brent that I had her. It was all I could do to keep that girl from running some more. She was so incredibly strong and I am not a small woman. She must have been all of two hours old.

We drove her back down to the herd, she found her mum. All is good.

She had quite a motor to run all that way uphill after just being born, Brent called her Motörhead. The photo above is Brent beginning the words, “She’s weeing on me.” I suppose being a rebel by running away and then pissing on the farmer also supports her name.

4 thoughts on “My Jogging Buddy”