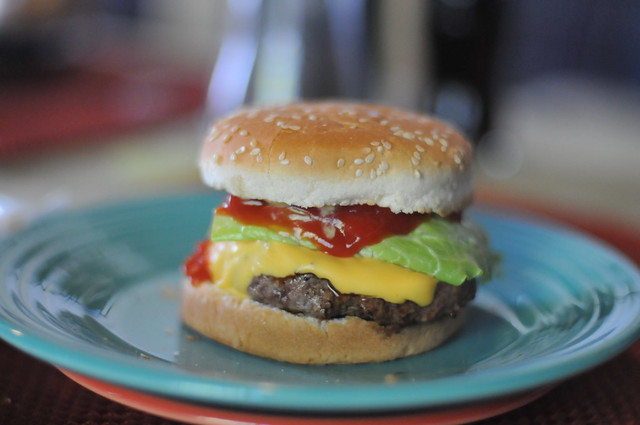 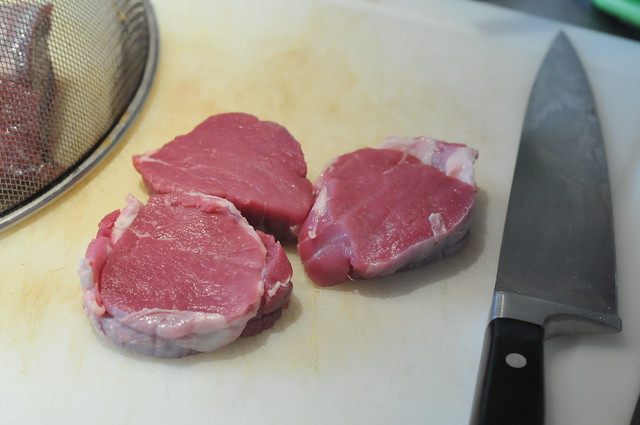 Filet Mignon in a pan.  Leek and garlic notes from this morning’s fry-up. 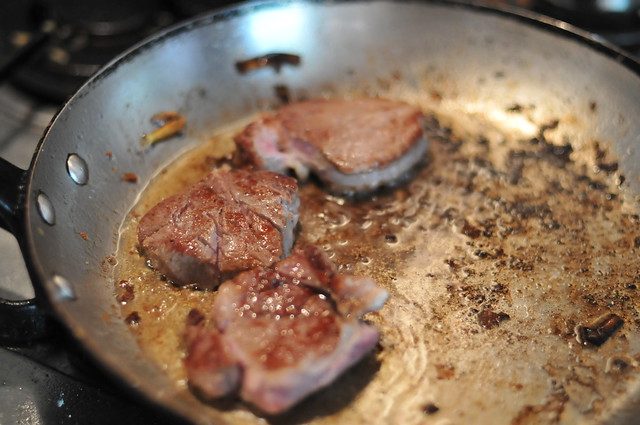 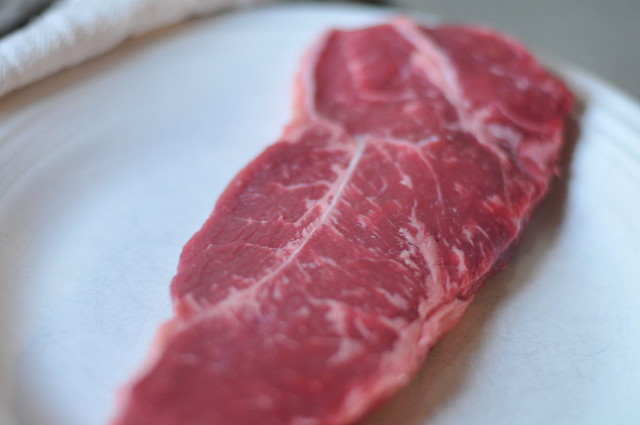 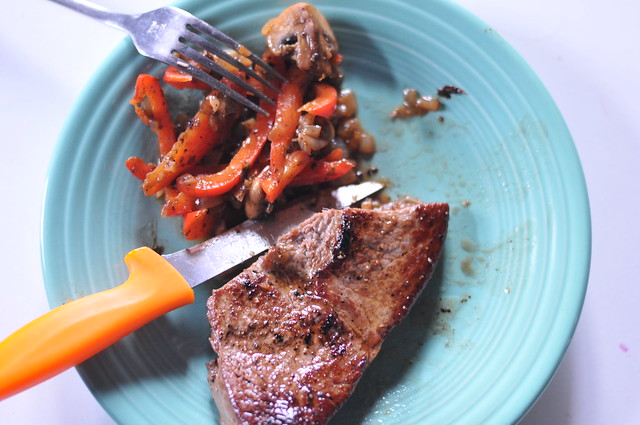 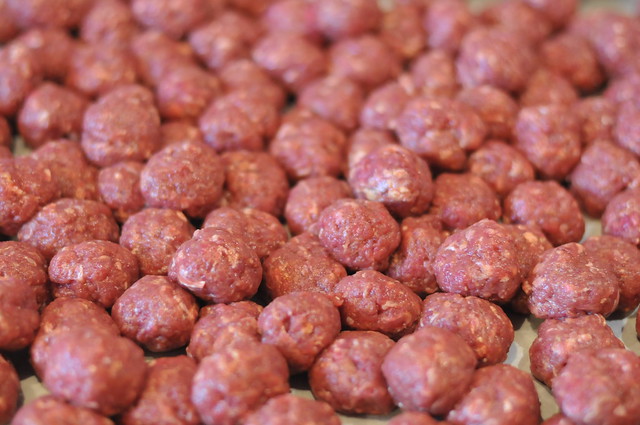 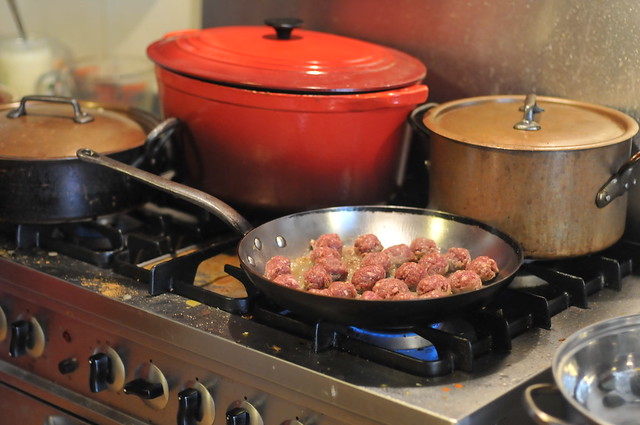 In curry!  On flat bread! 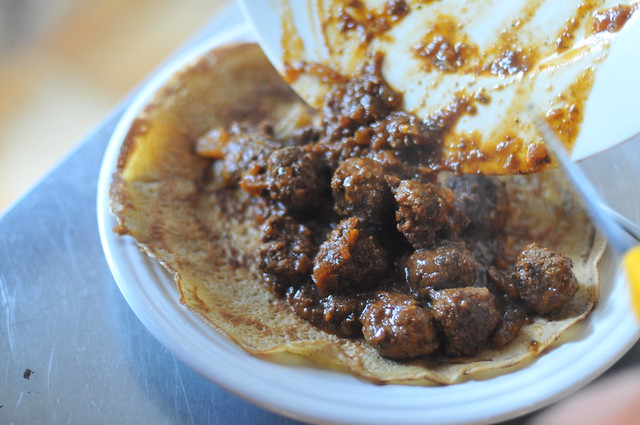 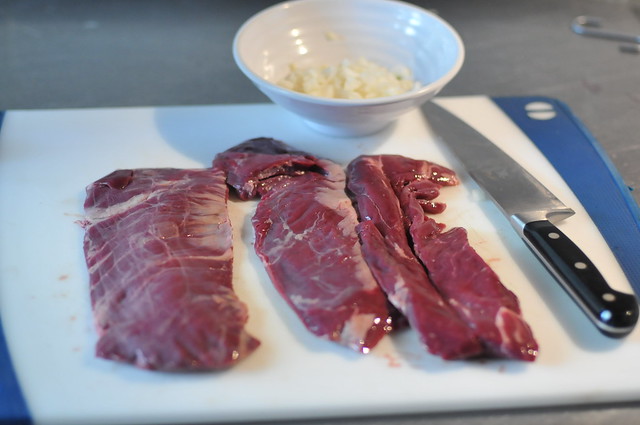 Served with some peas and friends! 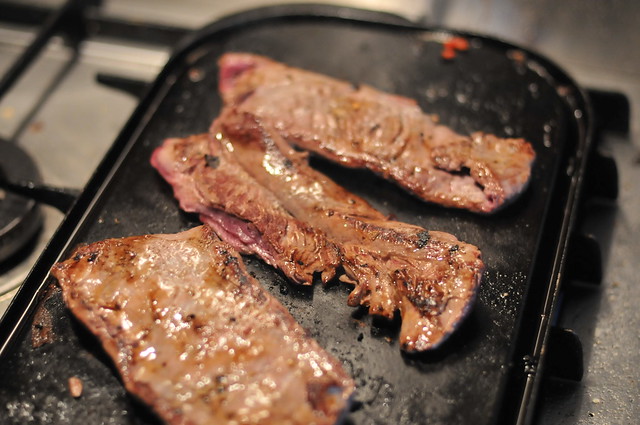 Something meaty all gone! 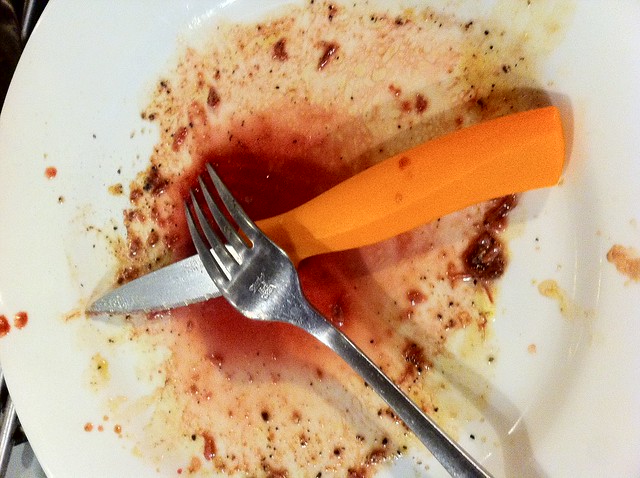 Aussie steak sandwich but with French bread and French mustard so not so much Aussie, but Aussie inspired! OI OI OI! 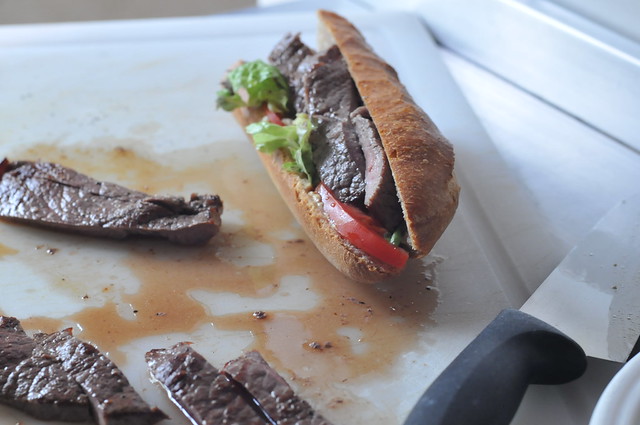 Crunch, pull, pass me a napkin! 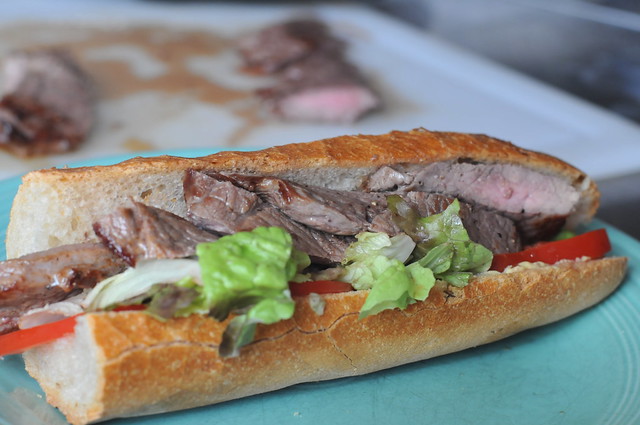 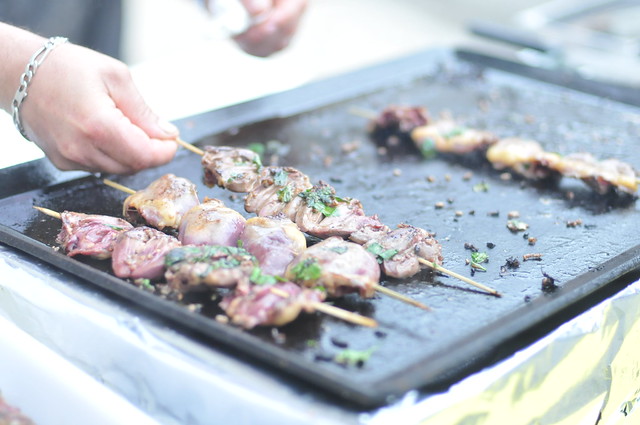 I can totally do a one handed push-up.  Come see!  C’est tellement dur maintenant!

Our little rental camionette wasn’t available for the Bordeaux run. Brent and Kevin dropped Lucy off for school and headed off to pick up our fridge car. I cleaned up and drank more coffee. They returned with a giant van.

Just before take-off, we hooked up “Aussie Ken,” the man who tells me where to go via Tomtom. When I get there, he says in his most suggestive husky Aussie voice, “you have REACHED your DESTination.” Which I follow up with my inside voice “in bed.” But Tomtom no worky. The little lighter of charge was busted. What ever shall we do? I think all the maps have been burned since Tomtom came around. How shall we get anywhere if it can’t be plugged in? Enter Kevin’s magic phone of navigation. A phone so smart it will step in to show me the way. “At the end of the road, turn right,” she says firmly. I turned left. I turned left because I’ve been to Bordeaux before and the best route is through Condom. I don’t know where the silly bitch was headed, but a left turn was surely the right start. A few moments after my left turn, I heard nothing. Another left turn and nothing again. She was sulking. She beeped once or twice to tell me about nearby camping sites, but other than that I was dead to her. She left only this message.

I was left with my memory of how to get there, which worked without batteries and a bit too much coffee.

Off I went, meat fridging nicely in the back chugging along in the big rig. I slowly accommodated my inflated sense of self as the roads widened and started to have painted lines. The “pay way” ticket station was my next challenge. I knew I was tall, but managed to shuffle in next to the little Euro cars without issue and a gentle brush of the plastic hanging tubes. That was, until the ticket was dispensed. I sat there for many minutes waiting for my ticket, yet there was no ticket on offer.   I tried a button and a double clap, nothing. Then I looked up. I had not noticed the tall ticket spit-out from my usual Skoda point of view. Us tall vehicles, we take our tickets on top.

Of course on the way back I tried to do a top ticket snap and was bottomed out.  I thought of reversing the rig in protest to demand top ticket status, but carried on to get home to my family.

The beast cruises nicely on the fast payway road.  It beeps at you if you go over 130 kilos per hour.  I never heard the tone, I only know because I read the manual.  It beeps most often when you’re passing bigger rigs than you.  Or so I’m told.  It tells you that you are “dépassé” which means that you are horribly out of fashion and shouldn’t be going so fast.

Meat delivered and let me tell you, that was a tasty burger!

( Kevin took this photo.  He made me write this.  He needs you to know this.   I’m guessing he also took the top van photo as well. K. whew.  Got that done.)

To the beefeaters in Bordeaux. It makes us happy and proud to reach out and beef someone.

Z and I took the frigo rental on the road on an uneventful road trip that safely delivered the goods. It’s nice to meet friendly faces at your destination.

A brain gets a tingle to see road signs that lead to Paris ( someday, Paris! ). We could go there, like, now. Even when on the I-road to Yakima, there’s a feeling of clasping hands and seeing how far this tank will go. If only my frigo had some extra boxes. With Z’s brown eyes and curls and my ability to make change, there’s no stopping us.

We headed back as dusk commenced. As we worked our hour down the 130 kilos per hour payway, struggling to keep the frigo cube from trembling at 117, we enjoyed seeing the Peugeots pass and the Chateaus in desperate need of relocation. Once we hit the hour through country French villages after eight, it feels like an implicit curfew has been agreed upon. People are not working. They seem to be home or eating or at the pub. Evening groceries are resting patiently to be rung up tomorrow. The baguettes are rising.

Back at the farm, the cows are some finishing there evening munch, while the rest rest. Z crashed in Nerac. Other kids are somewhere between shower and bed. The meat we tasted today was great.

Brent and our friend Kevin went out to buy some fence posts for today’s fencing extravaganza.  They managed to catch a few minutes for an Auch butcher trip before France closed down for lunch.  I liked the photos that Kevin took, so I thought I share them here to show you what a butcher in France sort of looks like.

The boys bought a pile of meat, beef excluded, securing yummy dinners to come.  After, they came back for lunch.  Zélie went down for a nap.  Then Brent went for a quick nap.  Then the cows napped.  The cats are always napping.  Then Kevin began to drift off for a nap.

I watched a few minutes of Britney in the xFactor.  No nap.  But I did sit down.