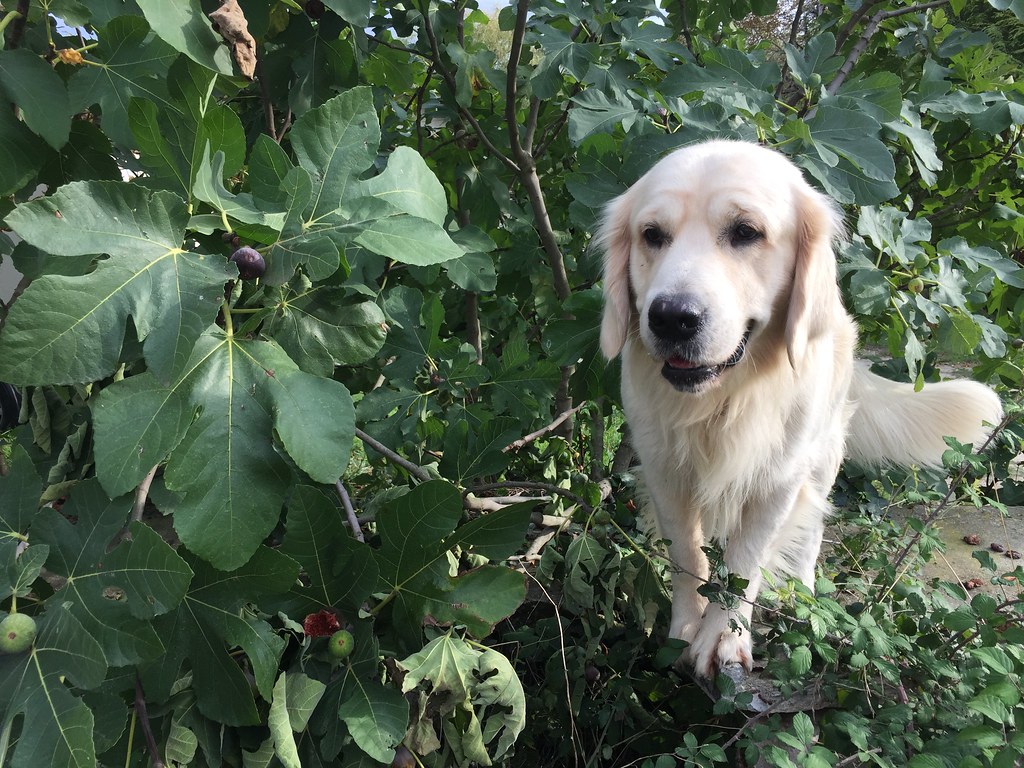 Fig season here.  Everyone loves figs.  Except me.  But it’s not about me. 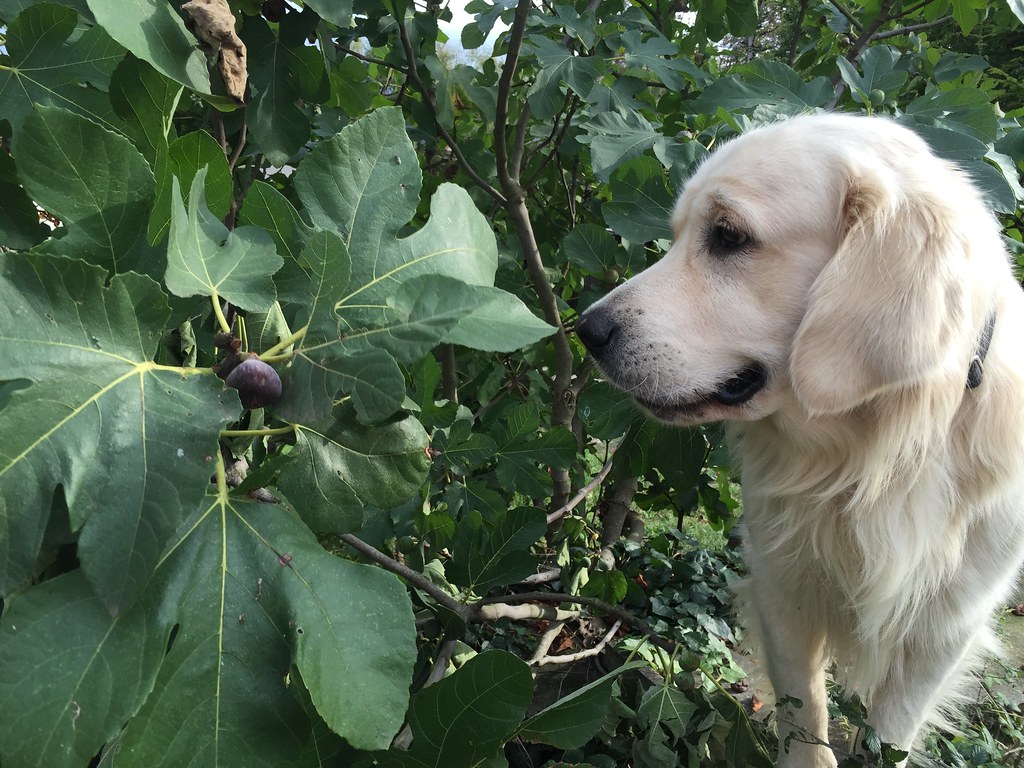 He really shouldn’t be eating too many figs.  It keeps him too regular.  Over regular. 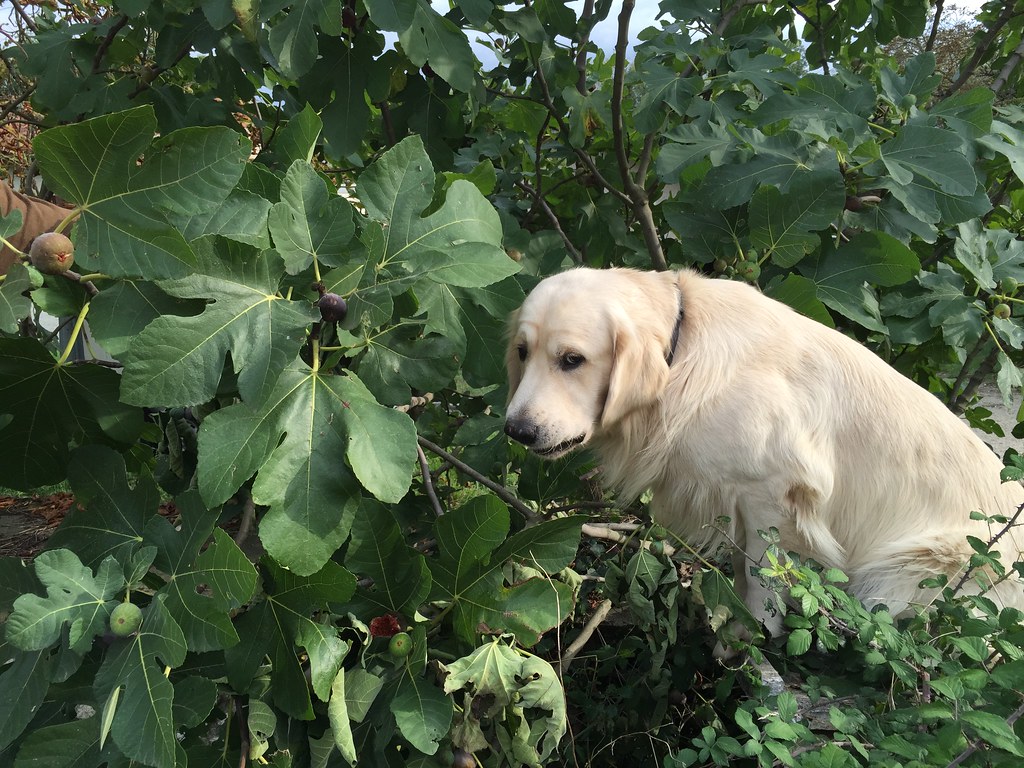 But he loves him some figs.  What’s a brutha gonna do?  He’s a Golden. 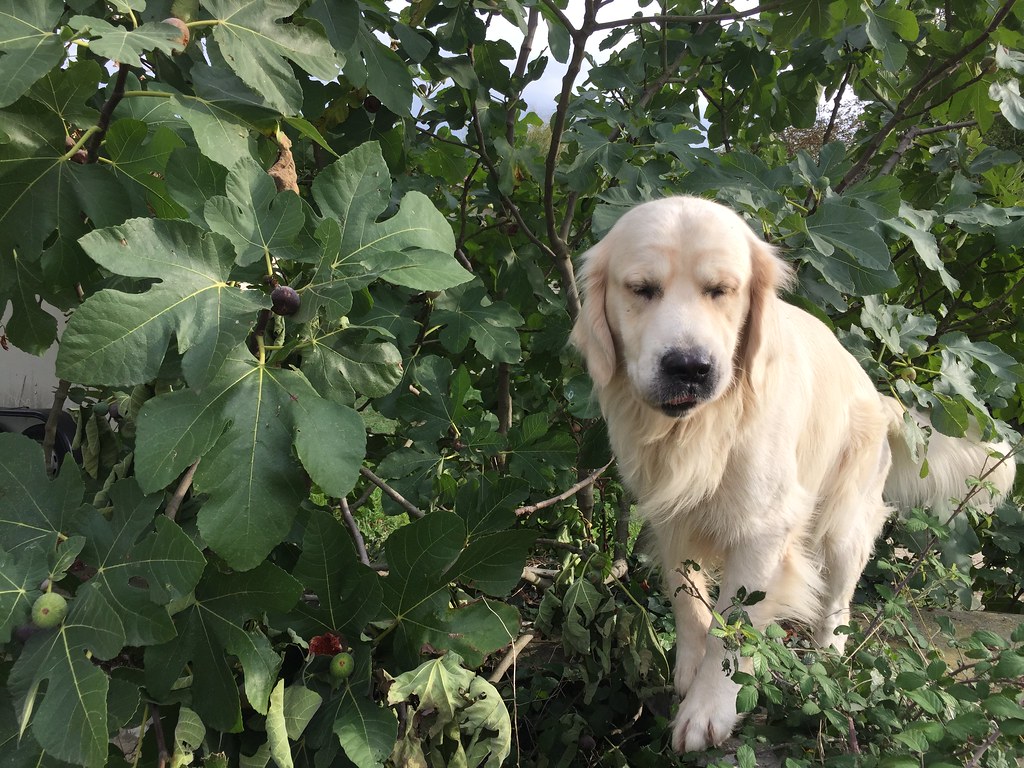 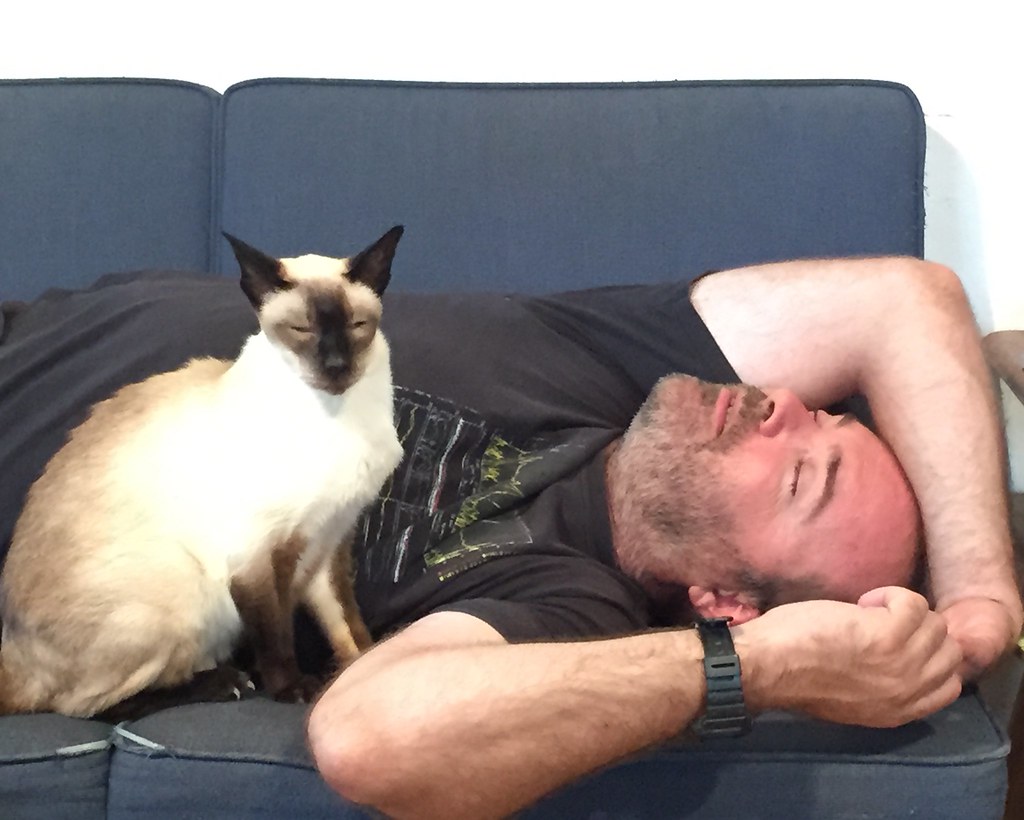 Not Brent.  Bug, the cat.  Bug has been with us for awhile.  We brought him over with us to France. Recently, he’s been showing signs of his age ( almost 16 ).  He loves the heat, but he’s looking a bit fragile. … and fenile ( that’s a senile feline ).

He carries on.  Perhaps he’s asserting his right to be an old curmudgeon by meowing that siamese meow befor breakfast, lunch and dinner. 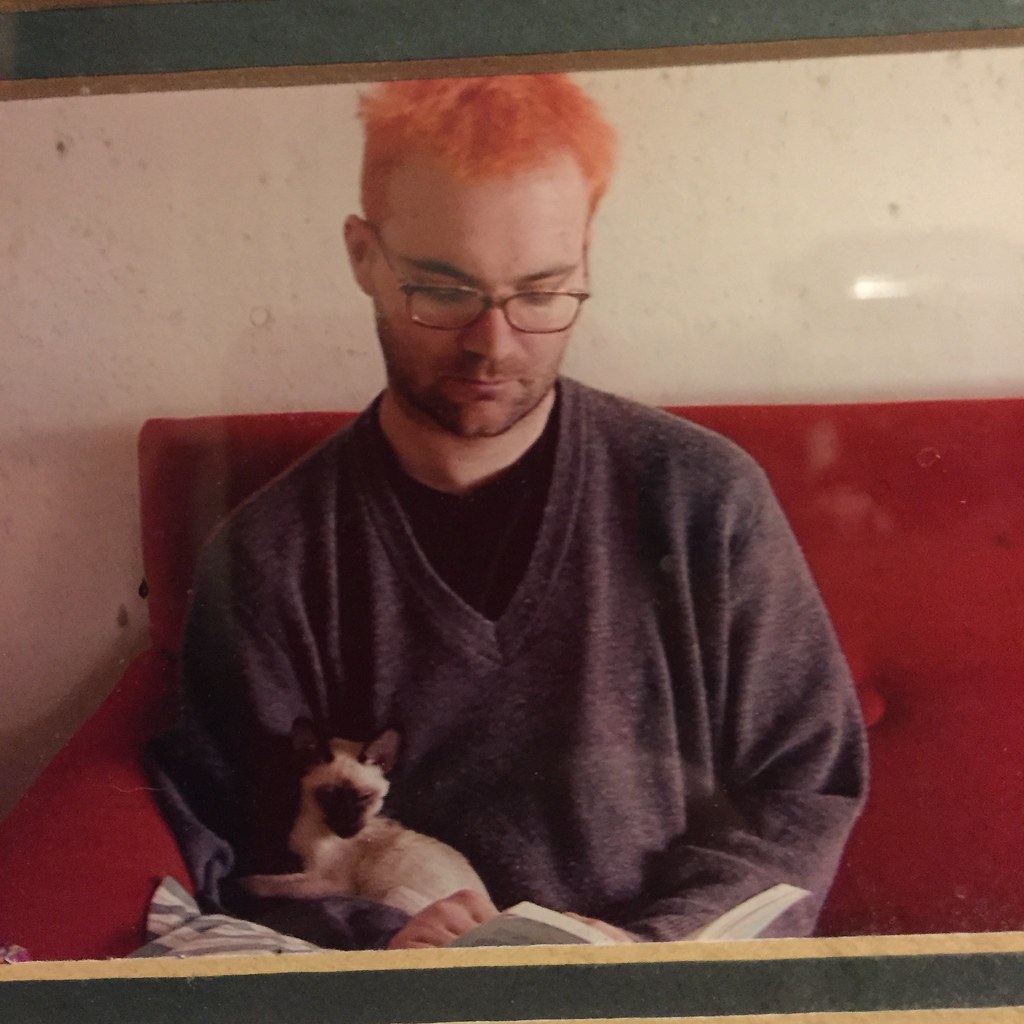 It’s hard to tell if he’s slowing down.  He’s always been a snug.  Even as a kitten. 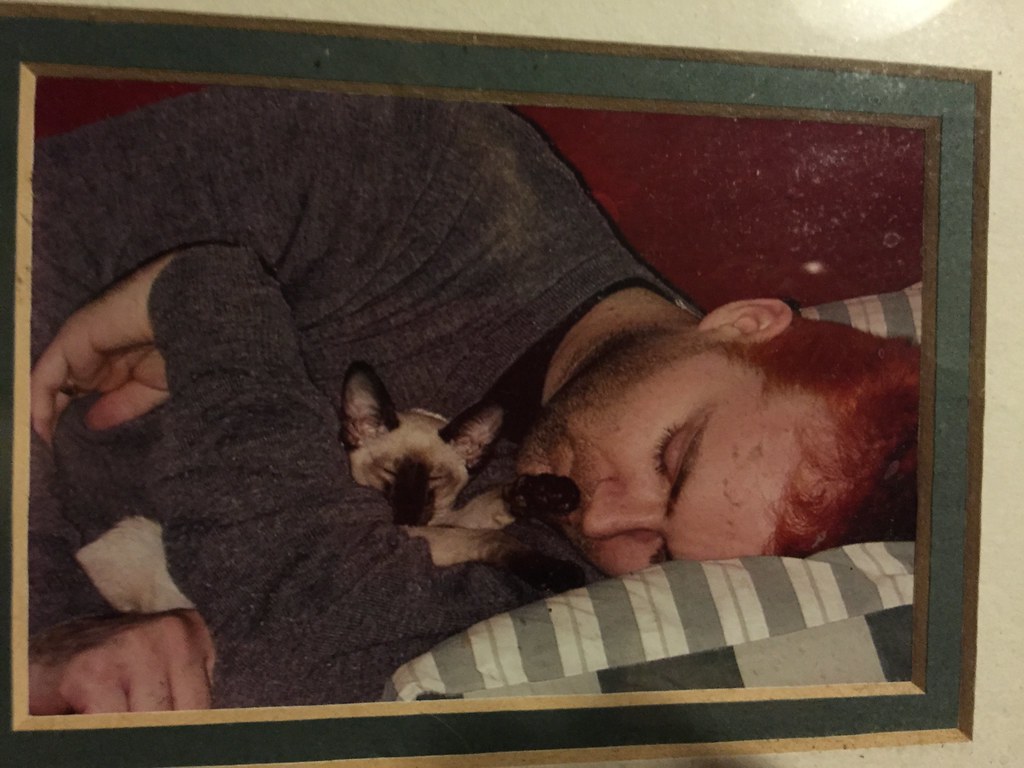 Okay, so not much has changed with Bug.  He’s a bit slower, meows louder for no reason and refuses to move out of your way.  Let’s leave it at older and wiser.  Long live Bug! 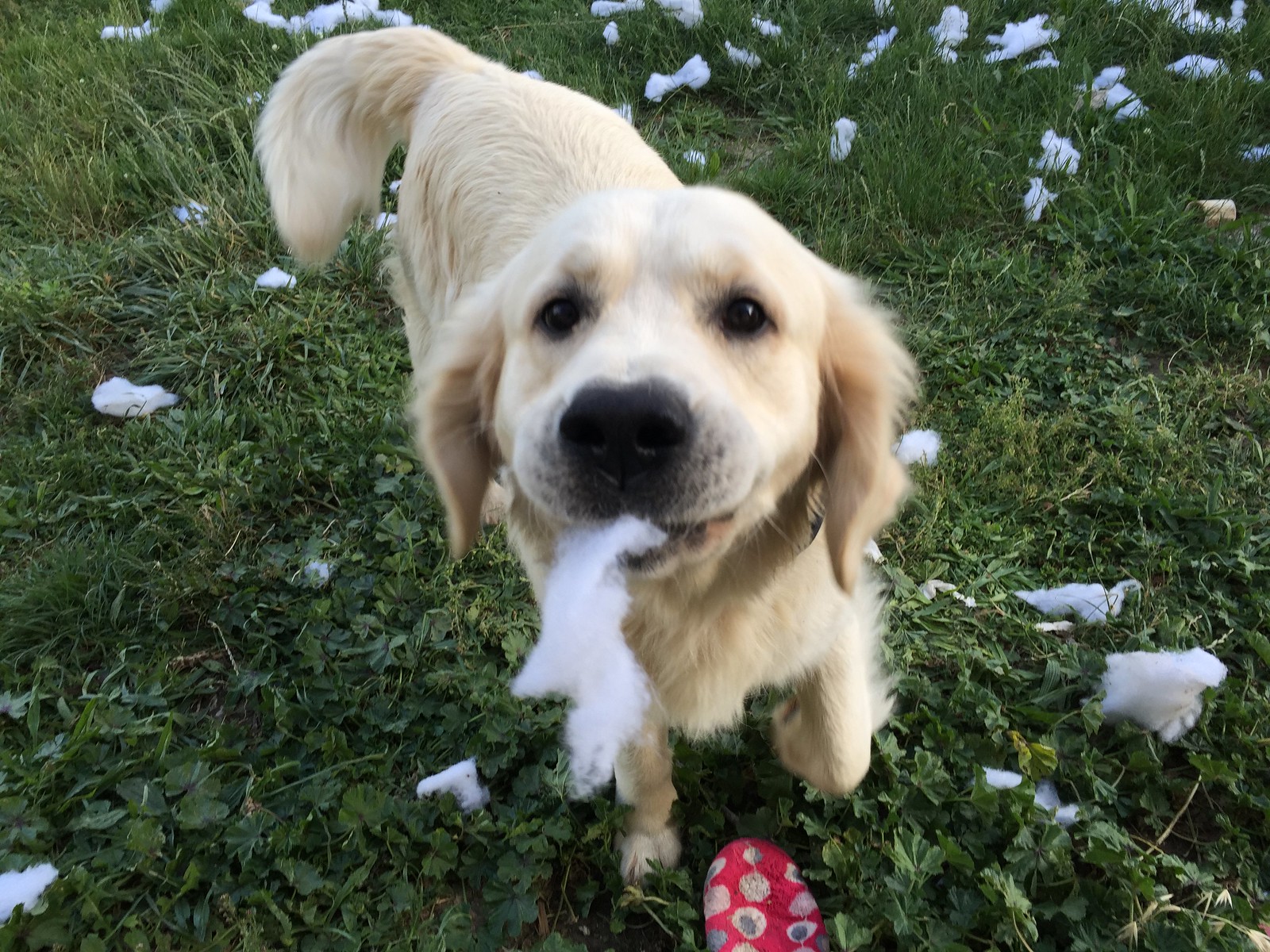 That’s not snow.  That is cushion fluff.

But when cushion fluff gets old, chew on other puppy.

I should start a list of what a Golden Retriever will eat ( … er retrieve ).  Some items are shocking. 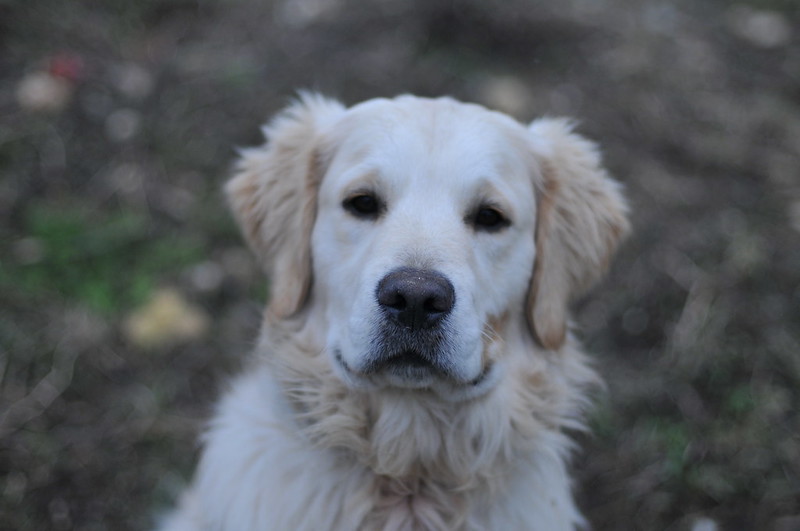 You weren’t, perchance, digging up my garden now?

Don’t blame it on the big guy. 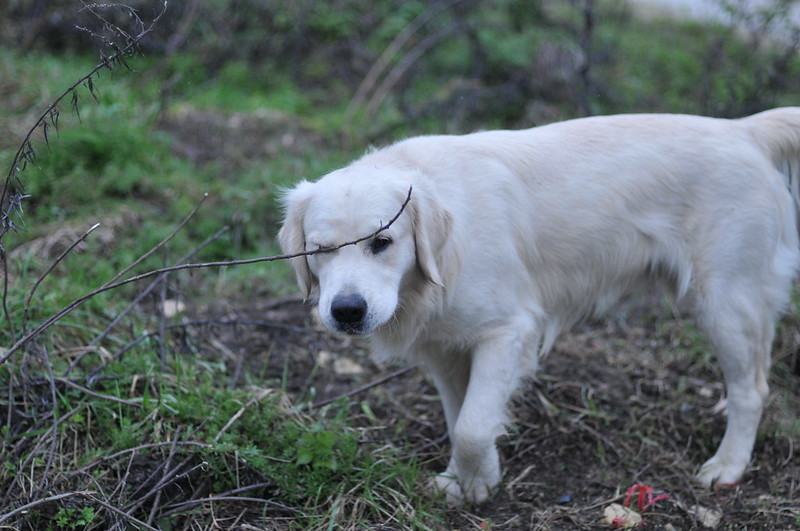 You both learned this naughty trick from that old bitch, Chorale. 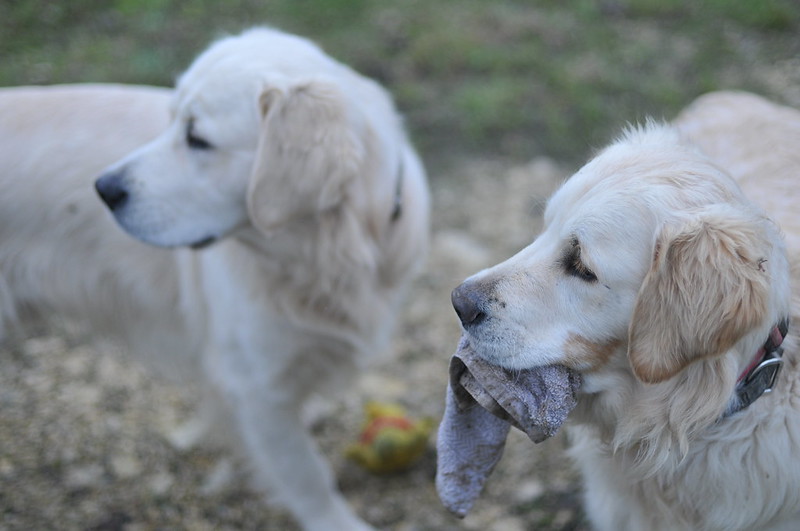 That’s it … chew each other and forget about my garden. 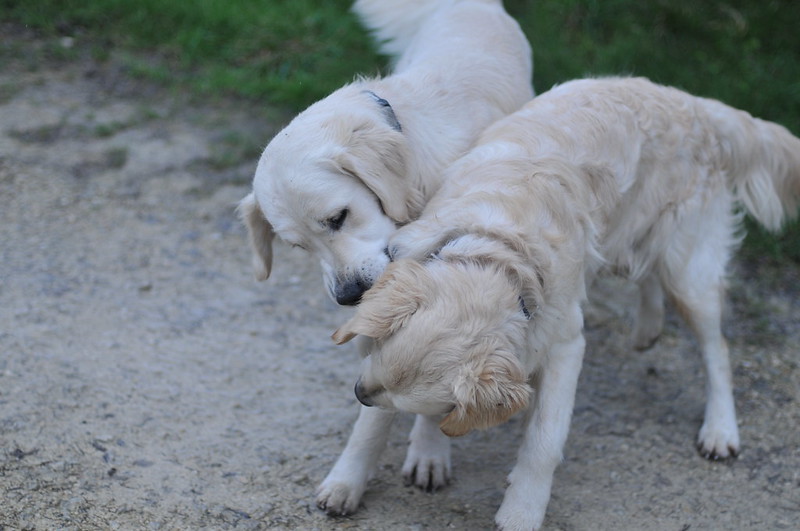 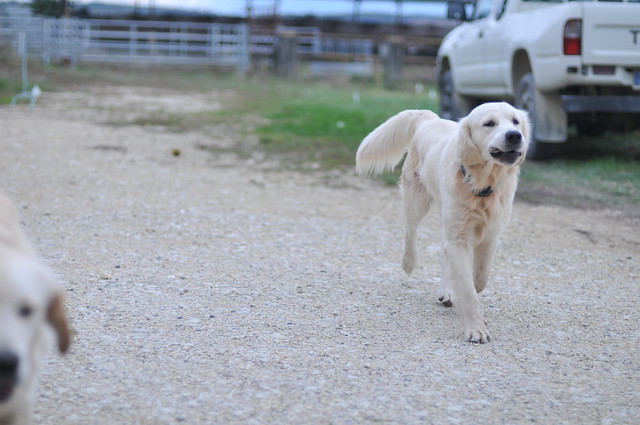 OH the boys have been bad.

They had the nerve they have the balls, across the river called Laspeyreres.  Off they went to the lakes that surround, two Gascon studs called Lumi and Jiggy.

… They were bad outlaws. 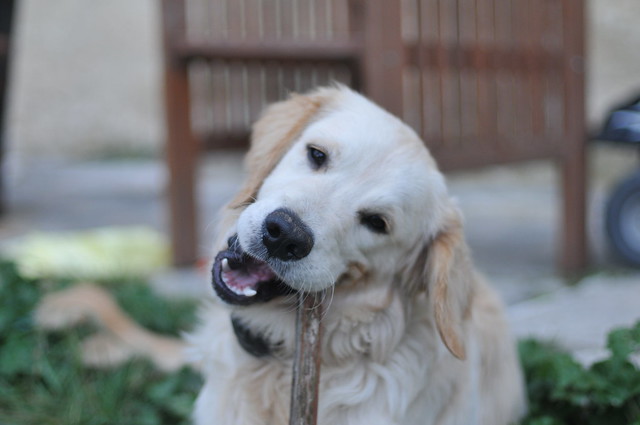 Off they went, but they came back.  On puppy probation ’til we fixed the fence.  The color of limstone, the eyes of brown, those charming, little puppies of Grasspunk farm. 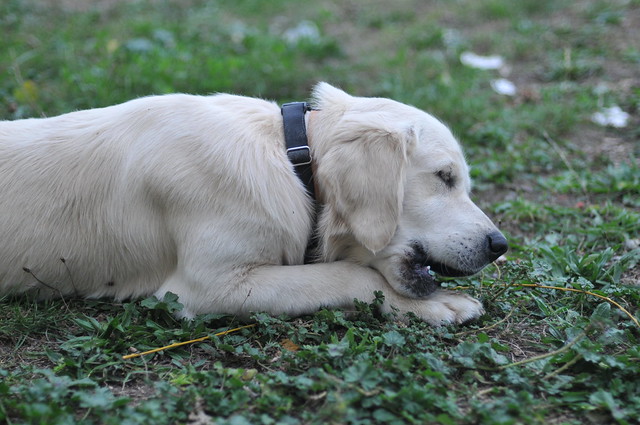 Now they’re out flapping ears in the wind.  Those two Gascon studs called Lumi and Jiggy. 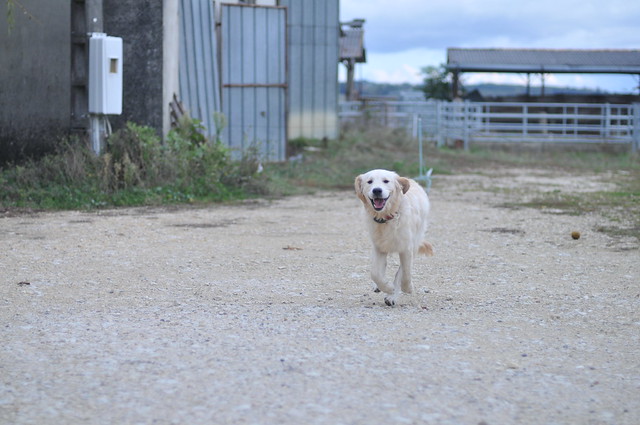 They sniff the ground, they look for figs.  They run around and they have a ball. 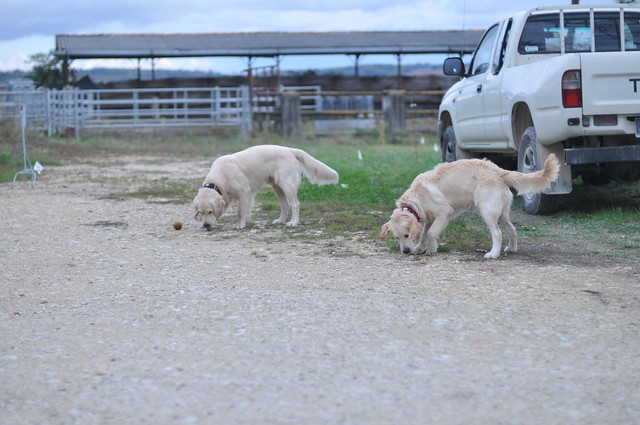 Perty little puppies run on the farm again.  Eyes of brown and on the packs of dogfood.  They love their space and they love to run, those two silly studs of Gascony. 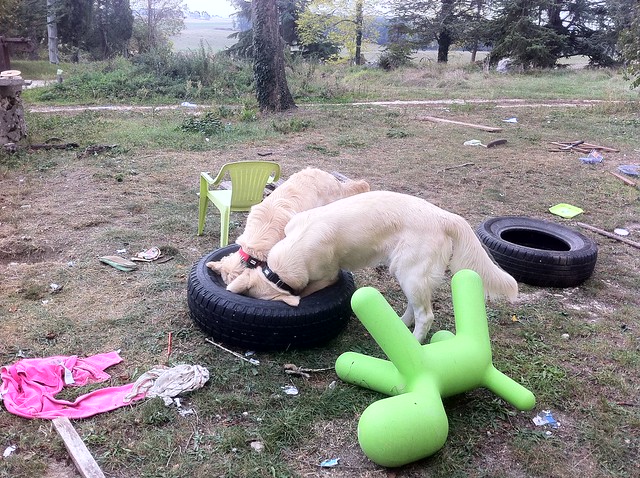 Stick a tennis ball inside an old tire.  ” Damn, if I only had an opposable thumb! ”  they’ll say.  But, they’ll keep on trying.  Gives you time to clean up the lawn they destroyed with bits of towel, shoe, wood and jacket. 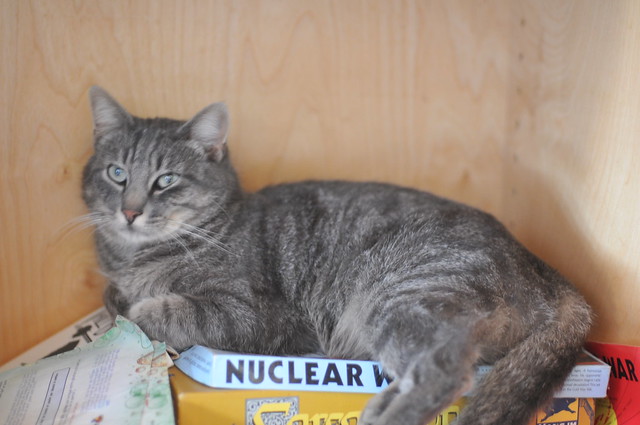 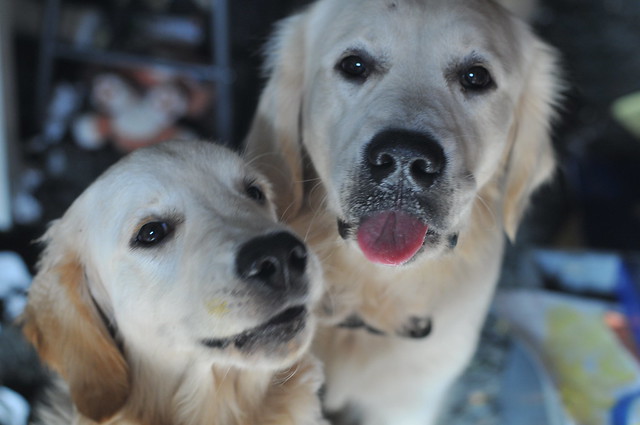 Too many posts on cows, kids and meat.  This is how Lumi expresses himself when he is slightly neglected. 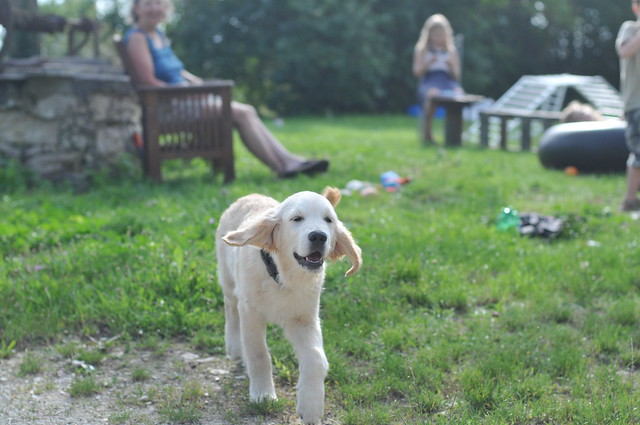 The heartwarming puppy charge.  ” Jiggy!! Come on!!”  And he comes running, flapping his ears.  The ear flapping helps get you closer to food. 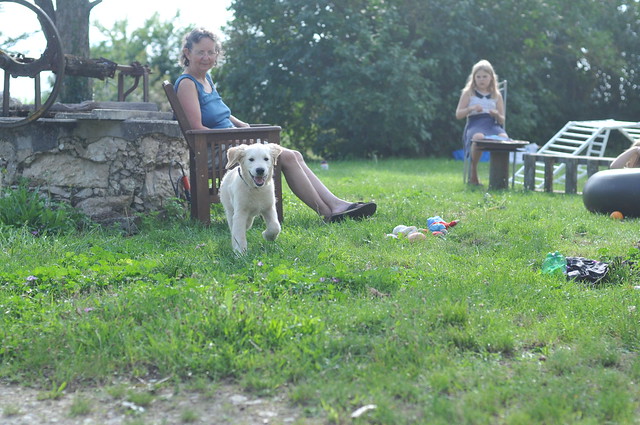 what’s not to love about a puppy charge? 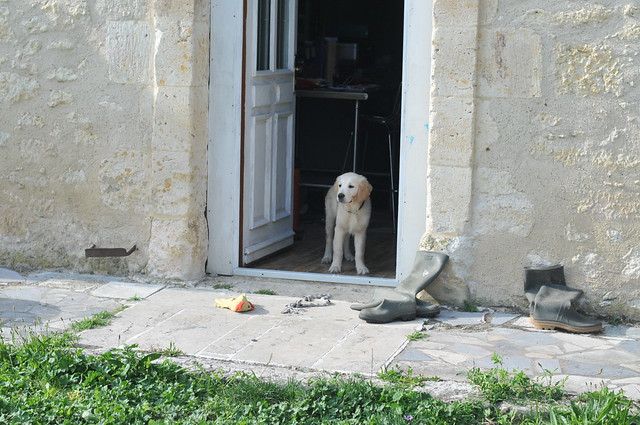 Then, like a three-year-old human, he runs.  Just because he can.  Why walk? 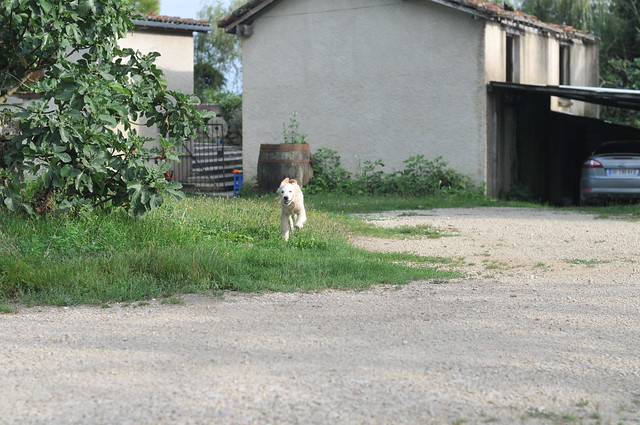 The girls chilled with my sis and  a tractor tube.  Many an hour can be spent with a great day and a large tractor tube. 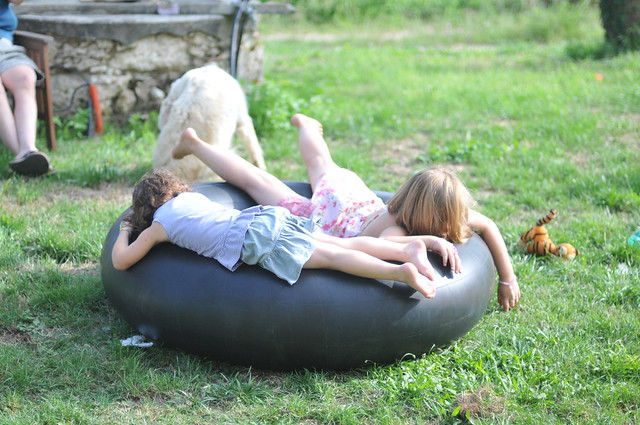 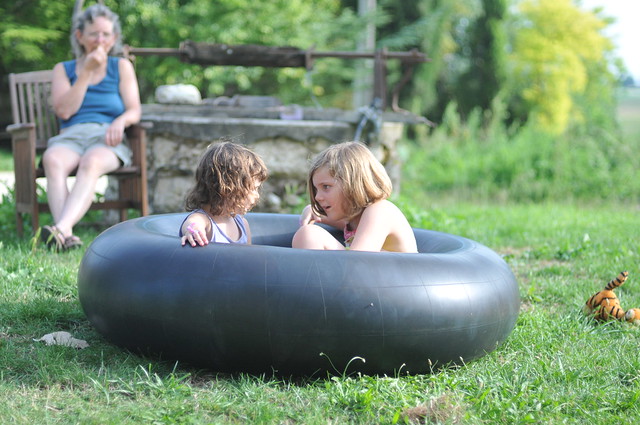 Bounced the other off. 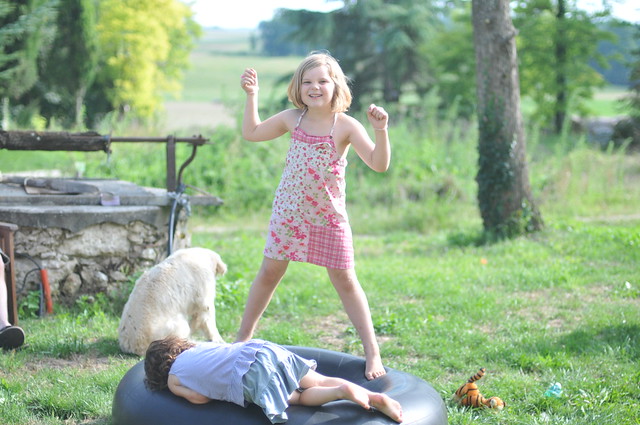 Lulu, Princess of Gascony, enjoyed her day with family. 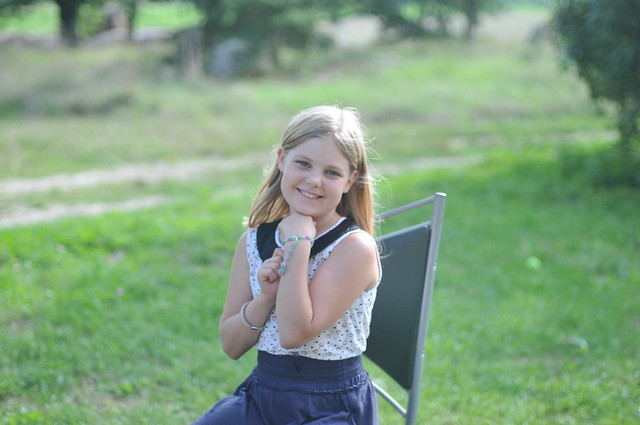 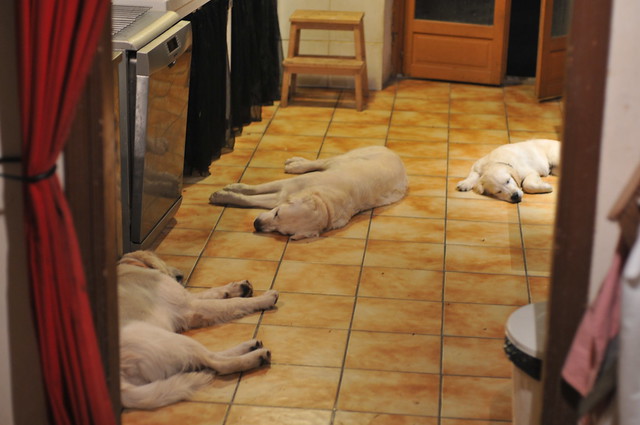